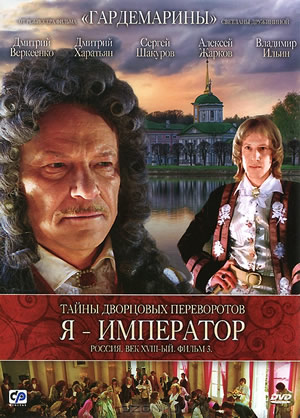 I am the Emperor

Having betrothed the eleven-year-old Emperor Peter II to his daughter, Menshikov immediately takes him and his sister Natalya to his palace. Fearing a bad influence on the youth from the Dolgoruky and especially Elizabeth, with whom Peter II was deeply in love, the prince deprives him of communication with the royal court.

But his plan - to keep Peter II in possible isolation until adulthood, secure his guardianship over him and marry Mary - is unexpectedly destroyed: a fatal illness forces the prince to say goodbye to his family and write a will. Having given the last orders to Peter and Mary, he prepared to die...

Finally, Peter II breaks out from under strict guardianship. The new chamberlain Ivan Dolgoruky takes him to Peterhof.

Hunting, wine, balls, "secret entertainments", cards - all this corrupts the young emperor. Behind this lies a new conspiracy: an experienced intriguer and courtier, Count Osterman, with the princes Dolgoruky, weaves a palace web, a new coup, which should finally topple the dying shadow ruler. The conspirators tell Peter II about Menshikov's participation in the execution of his father, Tsarevich Alexei, and turn him against the Most Serene.

But a miracle happened! Menshikov survived...

In honor of his recovery, he builds a temple, to the consecration of which he invites the young king. But instead of the usual obedience, Menshikov receives a public insult from Peter II - a slap in the face for his murdered father!

Menshikov understands that his absence has dramatically changed the political situation - and is secretly preparing a retaliatory strike...