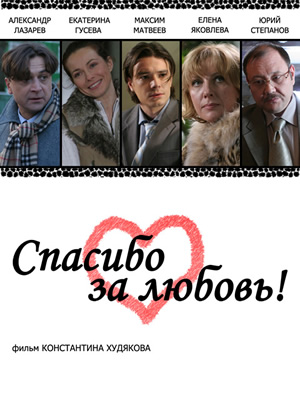 Thanks for the Love

A melodramatic story about the complex relationship between two eternal antagonists: daughter-in-law and mother-in-law. At a certain moment, the daughter-in-law, realizing that her marriage and fate are on the verge of collapse, goes to extreme measures. She hires a professional gigolo to make an aging woman fall in love with him. An enterprising young woman hopes that having known true passion, her mother-in-law will leave the young family alone. The calculation of the daughter-in-law turned out to be correct. But no one could have imagined that this passion would be fatal.

The plot is quite simple and even banal: the relationship of children and parents, or more precisely: the relationship of a mother and her lover, her son and her daughter-in-law. According to the plot, the mother (Elena Yakovleva) from the very first days of their acquaintance disliked the chosen one of her son, and even decided to deceive in order to destroy the family: she hires a person who should play the role of her daughter-in-law's lover in order to quarrel between her son and wife. But in reality, the situation suddenly gets out of her control, turning into both happiness and misfortune at the same time: unexpectedly for herself, she falls in love with him, and it seems even mutually, but ...