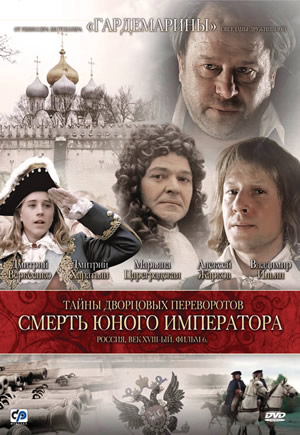 The Death of the Young Emperor

Everyone in Moscow is astounded by the engagement of Peter II and Catherine Dolgorukaya. The unhappy Catherine tries to leave Russia with her beloved Millesimo, but their plot is broken. Millesimo is brutally beaten when out hunting; Catherine is locked up. The injured Millesimo comes to the church for the betrothal ceremony. Overwhelmed by emotion, Catherine drops the ring. All the onlookers see this as an omen of approaching doom; and indeed they are right. Worn out by endless hunting, drunken parties and nervous strain, Peter II falls ill. Dolgoruky brothers keep his illness as secret. But rumors around Moscow: the Tsar is dead. Dolgoruky brothers are forced to show Peter II at the Epiphany parade in the Kremlin, but although the Tsar manages with difficulty to make it to the triumphal entrance, he collapses down the icy steps. The physician makes a terrible diagnosis: the pox. Terrified, Dolgoruky brothers attempt to marry Catherine to the dying Peter II and even draw up a fake will in favor of Catherine and heir, which they claim she is carrying. Ivan Dolgoruky, the Tsar's favorite, forges his signature on the will. Peter II is unable to speak and loses consciousness. He comes round only for a few moments, when his beloved aunt Elizabeth is leaning over him. His final words are: "Harness the horses. I want to go and see my sister". Finally, the young Tsar died 28th January 1730, aged only 14 years and 2 months. His tragic fate was a clear example of how fragile, unpredictable and lawless power was in Russia.